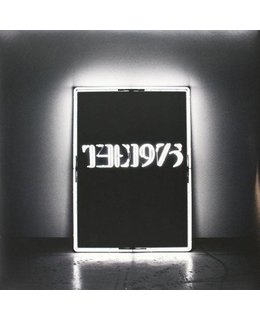 2013 EU issue on 180g 2LP =The 1975 is the eponymous debut album from this four-piece alternative indie-rock band from Macclesfield, Cheshire. with lovesick "Settle Down" and the sparkling "Girls," and "The City," "Chocolate," and "Sex" dr...

2013 EU  issue on 180g 2LP =The 1975 is the eponymous debut album from this four-piece alternative indie-rock band from Macclesfield, Cheshire. with lovesick "Settle Down" and the sparkling "Girls," and "The City," "Chocolate," and "Sex" drive and climb like the best anthemic '80s stadium rock, roiling a host of influences into a single distinct sound that, the moment it hits your ears, becomes timeless.

B1. She Way Out
B2. Menswear
B3. Pressure
B4. Is There Somebody Who Can Watch You

2013 album from the Manchester-based Alt-Rock band. alternative rock band from Wilmslow in Cheshire. The group consists of Matthew Healy (vocals, guitar), Adam Hann (guitar), George Daniel (drums), and Ross MacDonald (bass). After Hann invited the members to form a band, they passed their early days covering Punk songs in a local club. Healy was originally the drummer, but took over vocals after the previous singer left to start another band. Their name was inspired by scribblings found in the back page of an old Beat poetry book dated "1 June, The 1975." The release of their first EP, entitled Facedown, in August 2012 saw the band's first UK airplay on national radio with lead track "The City", which featured as part of a BBC Introducing show with Huw Stephens on BBC Radio 1. The 1975 once again garnered national radio attention in late 2012, with BBC Radio 1 DJ Zane Lowe championing their single "Sex." They found mainstream chart success in spring 2013 with single "Chocolate", which reached #19 in the UK singles chart.

1975, the ( Nineteen Seventy Five) A Brief Inquiry Into Online Relationships