Nederlands
Home Me Against The World [2 LP] 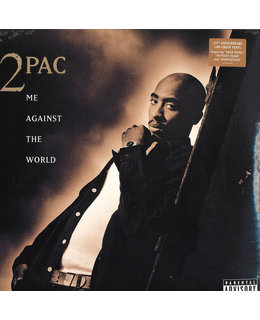 (1995) - 2020 EU reissue on standard 2LP= In honor of Me Against The World's 25th anniversary, Interscope/Urban Legends is reissuing 2Pac's third studio album, considered by many to be his most poetic and cohesive masterpiece. Recorded when he was just 23

2020 EU reissue on standard 2LP= In honor of Me Against The World's 25th anniversary, Interscope/Urban Legends is reissuing 2Pac's third studio album, considered by many to be his most poetic and cohesive masterpiece. Recorded when he was just 23-years-old, and released while facing an impending prison sentence, it is a lyrical tour-de-force that touches on the issues of poverty and violence. The album solidified 2Pac as one of the greatest rappers of all time. Includes standout anthems like `Temptations' and `So Many Tears.'

This month marks the 25th anniversary of Tupac Shakur’s career-defining third album, Me Against The World. Widely considered to be the legendary artist’s best work, as well as one of the most influential albums in hip-hop history, Me Against The World has been commemorated with a special 180-gram 2LP vinyl reissue, available today from Interscope and Amaru Entertainment.

Me Against The World was recorded when 2Pac was just 23 years old, yet his emotionally-charged performance and poetic lyricism made him sound wise beyond his years. The artist’s pointed commentary on poverty, violence, and police oppression not only resonated deeply with a generation of fans but also cemented 2Pac as one of the greatest rappers in music history.

The platinum-selling ‘Dear Mama’ was a starkly honest tribute to the rapper’s mother, activist Afeni Shakur, who was a strong influence on her son’s work. In the song, Shakur offered his deep appreciation for all that his mother did for him, despite the hardships that she struggled with. In 2009, the song was added to the National Recording Registry in the Library of Congress, which recognises audio recordings that are “Culturally, historically, or aesthetically important”. It was the third hip-hop track to be added to the registry.

The album also included the hit single ‘So Many Tears’, the prophetically-titled ‘Death Around The Corner’, and the relationship-focused ‘Temptations’, which produced a memorable music video featuring Ice-T as a hotel concierge and Coolio as a bellboy. Cameos are also made by Isaac Hayes, Jada Pinkett-Smith, Kenya Moore, Warren G and Salt-n-Pepa’s DJ Spinderella, among many others.

Sadly, 2Pac’s life – and his enormous potential – was cut short tragically just one year after Me Against The World was released. Over the decades, his short catalogue of work remains highly influential. Me Against The World has been named on countless “Best Of” lists, while in 2008, the Rock And Roll Hall of Fame, in collaboration with NARM (the National Association of Recording Merchandisers), included the album on their “Definitive 200” list, which recognizes “history’s most influential and popular albums”.