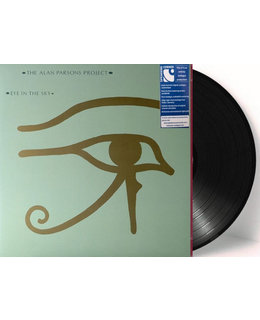 ( 1982 ) 2007/2020 EU German Spakers Corner reissue on 180g LP- featuring " Eye In The Sky," "Old & Wise " Songs on this album are in a number of different styles, from cool and funky to lyrical and heavily orchestrated. The Hipgnosis-designed sleeve is g

2007/2020 EU reissue on 180g HQ vinyl LP- featuring " Eye In The Sky," "Old & Wise " Songs on this album are in a number of different styles, from cool and funky to lyrical and heavily orchestrated. The Hipgnosis-designed sleeve is green with an image of the Eye of Horus.

Eye in the Sky is the first of three albums the Project recorded on analogue equipment and mixed directly to the digital master tape.

B1. You're Gonna Get Your Fingers Burned
B2. Psychobabble
B3. Mammagamma (Instrumental)
B4. Step By Step
B5. Old And Wise

The British progressive rock band Alan Parsons Project was active between 1975 and 1990. The Project consisted of Eric Woolfson and Alan Parsons surrounded by a varying number of session musicians. Englishman Alan Parsons met Scotsman Eric Woolfson in the canteen of Abbey Road Studios in the summer of 1974. Parsons had already acted as assistant engineer on The Beatles' Abbey Road and Let It Be and had recently engineered Pink Floyd's The Dark Side of the Moon.

The title track of Eye In The Sky, which was originally released in 1982, turned out to be the Project's greatest hit. It is also their last album earning the platinum status.

Similar to the first pressing of this album, the green cover is gold-foil stamped with an image of the Eye of Horus.

The Alan Parsons Project has shown how you can rise to the star off the usual market person cult even without elaborate light shows, sales-promoting rock greats in the musician team and self-written songs. Parsons, who had initially completed an apprenticeship as a sound engineer at EMI and later supervised several Paul Mc Cartney productions and the emergence of Pink Floyd's album "Dark Side Of The Moon" at the legendary Abbey Road Studios, took advantage of the home advantage for the solo -Career. While his co-producer Eric Woolfson worked as a songwriter, Parsons brewed it with his phenomenal sense of sound juicy mixtures of synthetic and natural sound ingredients.
Like all albums of the early years, "Eye In The Sky" also uses important zeitgeist themes. Owing to the no-futuristic lifestyle of the 80s, the songs exude slightly depressive notes, which are used as a contrast to steel rock rhythms, free from electronic gimmicks. There is also harmony-seeking vocal polyphony ("Gemini)", orchestral metal music in Spanish rhythm ("Silence And I") and velvety strings clouds ("Old And Wise"). A strong performance of the British sound artist at the control desk.

This Speakers Corner production was made using analog master tape and mastering 100% pure analog. More information at http://www.pure-analogue.com. All licenses and GEMA contributions have been deducted.
Recording: 1981 at Abbey Road Studios, London, by Alan Parsons