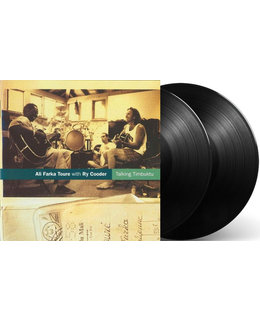 Ali Farke Toure and Ry Cooder have long treasured each other’s recordings. They first met in London in 1992 while both were touring Europe and Ali presented Ry with the first instrument he made, a one-string lute called a djerkal. It was agreed that they should 'try something together'. Recorded in just three days in LA in 1993 the resulting collaboration Talking Timbuktu well deserved its Grammy Award for Best World Music Album. Relaxed and accessible, the music is complimented by Ry's subtle guitar work and sensitive production while retaining the integrity of Ali's performance.

In September '93 Toure was set to play a string of dates in the States and a week was set aside for recording his new album. Cooder was to play on a couple of tracks. A few hours’ rehearsal at Cooder's Santa Monica home hinted at inspiring possibilities. The Malian guitarist's next three Californian dates all featured Cooder as special guest. The recording followed a week later by which time Cooder had agreed to produce the entire album and play on every track. The album is now available on vinyl with an additional previously unreleased track!