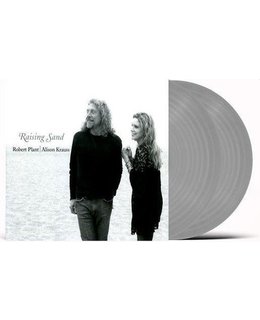 ( 2007 ) 2020 EU reissue on 180g coloured 2LP-Raising Sand Sweeps 2009 Grammies by Winning 6 Awards, Including Record of the Year. Produced by T Bone Burnett & featuring a stellar cast of supporting musicians, two of the most distinctive vocalists in mod

2020 EU reissue on 180g coloured vinyl 2LP-Produced by T Bone Burnett & featuring a stellar cast of supporting musicians, two of the most distinctive vocalists in modern music come together to create an amazing, unexpected & entirely new sound when they sing; with songs ranging from modern to classic, consisting mostly of lesser-known material from a wide spectrum of great blues, R&B, country & folk songwriters , includes a version of Plant & Page's 'Please Read the Letter'.


Raising Sand Sweeps 2009 Grammies by Winning 6 Awards, Including Record of the Year

For Alison Krauss, musical collaboration has been a way of life. Her latest musical collaboration, Raising Sand, is an astonishing album recorded in tandem with rock vocalist and songwriter Robert Plant. Raising Sand is their first recorded endeavor, and will prove revelatory to fans and the media on two counts: first that it happened at all, and, more importantly, that it is as successful and illuminating as it is.
From its embryonic, conceptual stages – well before any music materialized – the mere idea of Raising Sand held infinite fascination for both its creators and those around them. As word spread of an impending musical collaboration between Robert Plant and Alison Krauss, imaginations ran wild. Two artists, each at the pinnacle of their respective pantheons, Robert and Alison have seemingly little in common. But just below the surface, an elemental understanding flowed between them, waiting to be tapped...
Under the careful sonic stewardship of producer T Bone Burnett, Raising Sand is pitched three steps beyond some cosmic collision of early urban blues, spacious West Texas country, and the unrealized potential of the folk-rock revolution. Shockingly evocative, it is an album that uncovers popular music’s elemental roots while sounding effortlessly, breathtakingly modern. Despite hailing from distinctly different backgrounds, Plant and Krauss share a maverick spirit and willingness to extend the boundaries of their respective genres. Raising Sand finds Plant and Krauss functioning as sympathetic equals: creating a powerful new sound from both their common musical ground and their unrivaled sense of empathy. Optimized for vinyl release by T Bone Burnett.
Discs: 2
Drager(LP,EP,12,7,CD): LP
Qual(120grs,150grs,180grs): 180grs
Speed(33,45): 33
Extra info: gatefold
Label: Rounder Records
Originally released: 2007
This release: 2020