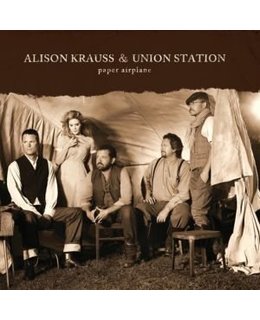 Alison Krauss' most recent triumph, the certified-platinum Raising Sand, her 2007 collaboration with Robert Plant and producer T-Bone Burnett, notched a total of six Grammy Awards, including Album of the Year and Record of the Year, bringing her unsurpassed total to 26. That mesmerizing modern-day masterpiece sets the stage for another stunner, Paper Airplane, the artist's first album of all-new recordings in partnership with her remarkably skillful and renowned band Union Station since 2004's Lonely Runs Both Ways.

The players: Jerry Douglas (dobro, lap steel, vocals), Dan Tyminski (guitar, mandolin, lead vocal), Ron Block (banjo, guitar) and Barry Bales (bass, vocals), with Krauss on lead vocal and fiddle, are five distinct personalities who come together to form something truly unique as a band. Each bandmate has his own bustling career, but when these singular musicians come together, they're an airtight unit devoted to the process of playing music together.

Produced by Krauss and Union Station, with studio legend Mike Shipley engineering and mixing, Paper Airplane contains 11 songs of poignancy and austere beauty, chosen with the impeccable taste and intuition that have characterized her entire body of work, delivered by this world-class unit with an immediacy that goes beyond mere virtuosity.

B1.  On The Outside Looking In
B2.  Miles To Go
B3.  Sinking Stone
B4. Bonita and Bill Butler
B5. My Opening Farewell