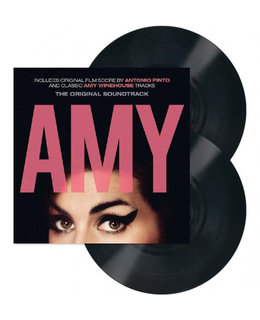 2015 EU issue on 180g 2xLP - Soundtrack to the Highest Grossing British Documentary of All Time at the UK Box Office!

From BAFTA award-winning director Asif Kapadia and the team behind Senna, Amy tells the incredible story of six-time Grammy-winner Amy Winehouse - in her own words. Featuring extensive unseen archive footage and previously unheard tracks, this strikingly modern, moving and vital film shines a light on the world we live in, in a way that very few can.

A once-in-a-generation talent and a pure jazz artist in the most authentic sense, Amy wrote and sung from the heart using her musical gifts to analyse her own problems. The combination of her raw honesty and supreme talent resulted in some of the most original and adored songs of the modern era. Her huge success, however, resulted in relentless and invasive media attention which coupled with Amy's troubled relationships and precarious lifestyle saw her life tragically begin to unravel.

The film's original soundtrack includes music from the film such as "Stronger Than Me" by Amy herself and various previously unreleased live performances throughout her storied career. In between these selections, the rest of the album is comprised of an original score by Golden Globe Award-nominated composer Antônio Alves Pinto.