Nederlands
Home ...And Justice For All =2LP= 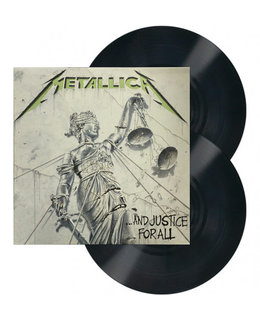 1988-2018 US remastered on VINYL 2LP =Metallica's 1988 release ...And Justice For All is the thrash giants' commercial breakthrough, with "Harvester of Sorrow," "Eye Of The Beholder" and "One"

2018 remastered on 180g 2LP = Metallica's 1988 release ...And Justice For All is the thrash giants' commercial breakthrough. The follow-up to 1986's Master Of Puppets and the band's fourth full-length overall, it was Metallica's first album to reach the Top 10 (#6), first to earn a Top 40 single ("One"), and first to win a Grammy Award ("One"). Having gone platinum in just nine weeks, ...And Justice For All has since sold over 8 million copies in the U.S. alone.

The ambitious album is also Metallica's first without original bassist Cliff Burton, who passed away in 1986 when the band's tour bus overturned in Sweden while they were on tour promoting Master of Puppets. Seldom has a band recovered from such tragedy with such a triumphant statement of power, aggression, speed, and heightened social awareness. Replete with stunning riffs and immense songwriting, ...And Justice For All is a landmark record in every sense of the word.

...And Justice For All produced three singles ("Harvester of Sorrow," "Eye Of The Beholder" and "One"), bringing the band unknown levels of success. They also chose this time to delve into new territory with their very first music video for "One" which was hardly the typical music video of the time. A dark, monochromatic, violent, and emotional piece, which pulled no punches, Metallica continued to prove that they were anything but typical.

Tracks:
LP1
A1 Blackened
A2 ...And Justice For All

B1 Eye Of The Beholder
B2 One