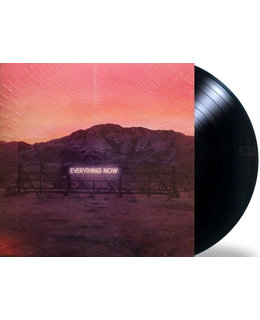 Label:
Availability:   In Stock
Delivery time:
€26,95 Incl. VAT (BTW)
Release date: 28-07-2017
2017 EU issue on standard LP- Everything Now is the fifth full-length offering from Quebec art-rock outfit Arcade Fire and follow-up to 2013's Grammy-nominated Reflektor. The thirteen track release features the dance-friendly, David Bowie-esque title track lead single "Everything Now" and was produced by Arcade Fire, Thomas Bangalter (Daft Punk) and Steve Mackey (Pulp), with co-production by Markus Dravs (The Suburbs, Coldplay, Mumford & Sons).
Tracks:
A1 Everything Now (Continued)
A2 Everything Now
A3 Signs Of Life Arcade Fire
A4 Creature Comfort
A5 Peter Pan
A6 Chemistry
A7 Infinite Content
A8 Infinite_content
B1 Electric Blue
B2 Good God Damn
B3 Put Your Money On Me
B4 We Don't Deserve Love
B5 Everything Now (Continued)
The album was recorded at Boombox Studios in New Orleans, Sonovox Studios in Montreal, and Gang Recording Studio in Paris. "There's sort of an everything-nowness to life, I feel like almost every event and everything that happens surrounds you on all sides," frontman Win Butler explained to BBC Radio 1. "It's trying to capture some of the experiences of being alive now in all its flaws and all its glory.
Discs: 1
Drager(LP,EP,12,7,CD): LP
Qual(120grs,150grs,180grs): standard
Speed(33,45): 33rpm
This release: 2017