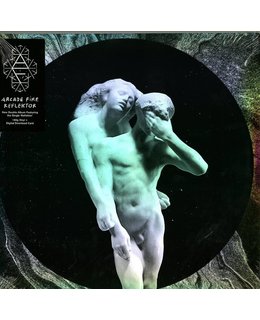 2013 US issue 180g 2LP+download=With a penchant for majestic, theatrical, bombastic anthems, Montreal's Arcade Fire has amassed a broad loyal following without compromising their singular artistic vision. Reflektor is the band's highly anticipated fourth full-length record and follow-up to the 2011 Grammy winning Album of the Year, The Suburbs.
Packaged in a gatefold jacket printed on rainbow holographic board. LP also includes a coupon for a full download.

Influenced by trips to Haiti and Jamaica, and lyrically inspired by the 1959 film Black Orpheus and Danish philosopher Soren Kierkegaard's essay, The Present Age, the epic 15-track double album was produced by the band, LCD Soundsystem mastermind James Murphy and longtime collaborator Markus Dravs and features guest vocals by David Bowie on the title track.

"On The Suburbs we said that Depeche Mode and Neil Young were approximate poles of the album, and this album too has poles," explained Will Butler to The Guardian. "One of those poles was the Haitian rhythms. Synth string drones is another."

Frontman Win Butler on Reflektor to BBC Radio 1's Zane Lowe: "It's longer than [2010 album] 'The Suburbs' – it's a double record – mostly down to the fact that the songs are a lot longer. I mean, 'Reflektor' is seven-and-a-half, there's another couple of seven-minute songs on the record and so it made more sense to stretch it out to two records with two distinct sides. It's more of a classic double LP vibe where you have to flip the side and it takes you to a different place."

He adds, "The joy of making music in 2013 is that you're allowed to like the Sex Pistols and ABBA and it's fine. You can like '90s hip-hop, you can like - which even when I was a kid that wasn't the case - you liked grunge or you liked this. To me the world doesn't work that way anymore, it's like such an explosion, and anything that's good kind of rises to the top. And we kind of want to make music that respects that. It's like a mash-up of like Studio 54 and Haitian voodoo music and I think it's a really beautiful thing about music now."

"Arcade Fire's third album, 2010's The Suburbs, was urgent and clear, a record about dreams and escape, gassed with classic-rock punch. It was a Number One hit and rightly won a Grammy for Album of the Year...Reflektor is even better, for this reason: the jarring, charging union of Murphy's modern-dance acumen and post-punk sabotage with Arcade Fire's natural gallop and ease with Caribbean rhythm.

"...It is tempting to call Reflektor Arcade Fire's answer to the Rolling Stones' 1972 double LP, Exile on Main Street. The similarities (length, churn, all that reverb) make it easy. But Reflektor is closer to turning-point classics such as U2's Achtung Baby and Radiohead's Kid A – a thrilling act of risk and renewal by a band with established commercial appeal and a greater fear of the average, of merely being liked." - David Fricke, Rolling Stone

Nick Cave/Nick Cave & The Bad Seeds Push the Sky Away