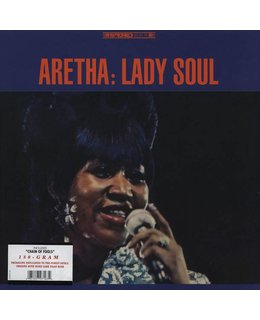 2012 EU reissue on 180g vinyl -One of Aretha's Best! Re-Mastered at a Great Price! Ranked #84 in Rolling Stone's '500 Greatest Albums of All Time,' Aretha's position as soul music's premier female vocalist was consolidated by Lady Soul. Her strident reading of “Chain of Fools” set the tone on which the singer unveiled several stellar original compositions and reinterpreted a batch of classic songs. Franklin's gospel roots were clearly displayed on “People Get Ready” while her interpretation of “(You Make Me Fell Like A) Natural Woman” showed both her vulnerable and assertive qualities.

The album also features the fine soul ballad 'Good to Me as I Am to You' with Eric Clapton on guitar. Lady Soul captures a performer at the peak of her power, restating her ability to take material and make it uniquely her own. This 1968 tour de force is one of the absolute pinnacles of the Queen's incredible artistic legacy. this is a classic album in every sense of the word.

Tracks:
A1 Chain Of Fools
A2 Money Won't Change You
A3 People Get Ready
A4 Niki Hoeky
A5 (You Make Me Feel Like) A Natural Woman