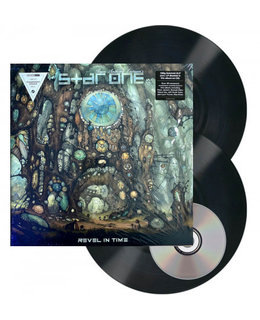 2022 EU issue 180g vinyl 2LP +CD - “Revel in Time”, the third album from ARJEN ANTHONY LUCASSEN'S STAR ONE, is as much of a reaction as it is a contrast to Arjen Lucassen’s previous album, “Transitus” from Ayreon. While “Transitus” is a cinematic experi

Label:  Mascot Records
Availability:   In Stock
Delivery time:
€34,95 Incl. VAT (BTW)
Release date: 18-02-2022
2022 EU issue on 180g vinyl 2P +CD - “Revel in Time”, the third album from ARJEN ANTHONY LUCASSEN'S STAR ONE, is as much of a reaction as it is a contrast to Arjen Lucassen’s previous album, “Transitus” from Ayreon. While “Transitus” is a cinematic experience that you may almost call a musical, “Revel in Time” is a heavy album that is very riff driven and there is more focus on virtuoso musicianship. Similar to its predecessors, “Revel In Time” works as a concept album. All tracks are inspired by different movies that deal with some kind of manipulation of time. There is one thing this time around that is quite different compared to the earlier STAR ONE albums: The first two had the same cast of four singers: Floor Jansen, Russell Allen, Damian Wilson and Dan Swano.
Tracks:

However, this time Arjen decided to generally have mainly one singer per track, and a different for almost each track. This shows especially on CD 2, the “Same Songs, Different Singers”-CD as Arjen likes to call it. The guide vocals that were recorded (for the other singers) were way too good to just be guide vocals. Thus, Arjen decided to release a second version of the songs with the guide vocals on them as CD2. At some point he started spontaneously inviting other singers to sing some of these tracks, because he was curious how the songs would sound with their voices. Ultimately CD2 ended up with no less than 9 different singers, all equally as good as the ones on CD1. A total of about 30 different musicians contributed to the new album, not all of them being singers though. The core of STAR ONE remains Ed Warby’s powerful drums as well as Arjen’s guitar and bass work that hold it all together and give it that typical STAR ONE sound. The icing on the cake is the front cover art that was created by Arjen’s trusted favorite artist Jef Bertels.