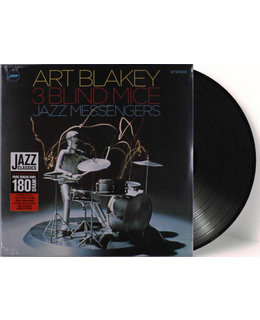 2018 EU reissue on 180g vinyl LP-Three Blind Mice is a 1962 jazz album released by Art Blakey and The Jazz Messengers on the United Artists Jazz label, featuring live material recorded in 1962 Club Renaissance, Hollywood. It was reissued later in 1962 in two volumes by Blue Note Records, adding two tracks recorded in 1961 at The Village Gate and also unreleased material from the primary session. It was bassist Jymie Merritt's final recording with the group before having to leave to recover from an illness; he would be replaced by Reggie Workman.