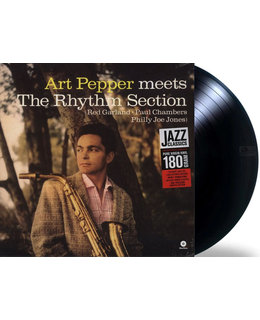 By the time of this, Art Pepper's tenth recording as a leader, he was making his individual voice on the alto saxophone leave the cozy confines of his heroes Charlie Parker and Lee Konitz. Joining the Miles Davis rhythm section of pianist Red Garland, bassist Paul Chambers, and drummer Philly Joe Jones made the transformation all that more illuminating. It's a classic east meets west, cool plus hot but never lukewarm combination that provides many bright moments for the quartet during this exceptional date from that great year in music, 1957. A bit of a flip, loosened but precise interpretation of the melody on "You'd Be So Nice to Come Home To" gets the ball rolling, followed by a "Bags Groove" parallel with "Red Pepper Blues," and a delicate, atypical treatment of "Imagination." A compositional collaboration of Pepper and Chambers on the quick "Waltz Me Blues" and hard-edged, running-as-fast-as-he-can take of "Straight Life" really sets the gears whirring. Philly Joe Jones is a great bop drummer, no doubt, one of the all-time greats with Kenny Clarke and Max Roach. His crisp Latin-to-swing pace for "Tin Tin Deo" deserves notice, masterful in its creation and seamlessness. Pepper makes a typical "Star Eyes" brighter, and he goes into a lower octave tone, more like a tenor, for "Birks Works" and the bonus track "The Man I Love." It's clear he has heard his share of Stan Getz in this era. Though Art Pepper played with many a potent trio, this one inspires him to the maximum, and certainly makes for one of his most substantive recordings after his initial incarcerations, and before his second major slip into the deep abyss of drug addiction. =ALLmusic=

Ahmad Jamal/Trio But Not For Me =180g vinyl LP=