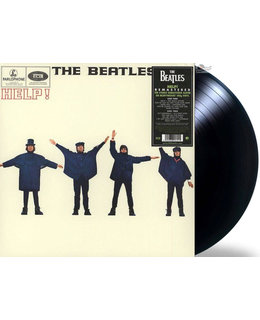 (1965 ) 2012 EU presssing=2009 Remastered from orginal master tapes, pressing on 180gr vinyl=On the surface, Help! was the soundtrack to the Beatles’ second feature film. Yet the 1965 record marked the emergence o...

2012 EU Limited edition stereo issue= 2009 Remastered from orginal master tapes, pressing on 180gr vinyl=On the surface, Help! was the soundtrack to the Beatles’ second feature film. Yet the 1965 record marked the emergence of several new directions for the band—and benefited from the biggest strides in production technology yet. Thematically encompassing mature sexual longing, uncertainty, estrangement, infatuation, and innocence, the group pounced on an armada of available instruments—acoustic guitars, bongos, electric pianos, flutes, and even strings—to deliver one of the greatest pop albums time has ever known. And now, it finally sounds like it always meant to sound—bloody brilliant. =Cut at Abbey Road Studios by a First-Rate Team of Producers and Engineers: Stringent Procedures and Safeguards Ensure Optimum Audiophile-Quality Sound

Part of Capitol/Apple’s quintessential Beatles catalog masters series on LP, Help! has been remastered by a dedicated team of engineers that includes Guy Massey, Steve Rooke, Sam Okell with Paul Hicks and Sean Magee. Proper care and a painstaking series of steps were taken to ensure that music lovers would hear the Fab Four in all their glory with unprecedented clarity and transparency.

Yes, that means the timeless poignancy of “Yesterday” comes across with truly unimaginable heartbreaking sincerity. It means that the volume pedal George Harrison uses for the first time on “I Need You” and “Yes It Is” is fully discernible. It means that you can hear the woody cavity of he back of the acoustic Gibson guitar Ringo beats to add percussion to “I Need You.” And yes, the fuzz-pedal bass track Paul McCartney added to the original on “Think for Yourself”—his first overdub on record—is preeminent. As is the soulfulness of the falsetto voices.

The advances in sonics were largely made possible by new Studer J-37 four-track recorders. Not only does this new LP pressing present the enhancements like never before, it adds to our enjoyment and insight of the music, allowing listeners to sense get as close to what went down as possible. So, and the 1:10 mark of “I Need You,” the moment when Lennon hits the rim of the snare drum comes alive, the happy accident possessing the same amount of body, richness, detail, and depth as the rest of the landmark music on this set. Capitol has outdone itself.
=============================================================
With EMI’s legendary Abbey Road Studios providing the backdrop, the four-year restoration process combined veteran expertise, state-of-the-art equipment, vintage studio gear, and rigorous testing to net what is without doubt the highest fidelity possible and authentic, jaw-dropping sound guaranteed to rival the original LPs. There is no longer any need to pay hundreds of dollars for Japanese pressings.