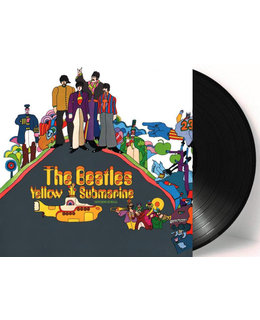 2012 EU pressing of 2009 Remastered from orginal master tapes, pressing on 180gr vinyl= the classic soundtrack of the 1968 movie,  Cut at Abbey Road Studios by a First-Rate Team of Producers and Engineers: Stringent Procedures and Safeguards Ensure Optimum Audiophile-Quality Sound

The soundtrack to the Beatles’ animated film of the same name, Yellow Submarine presents four new Beatles tracks recorded between 1967 and early 1968. In addition, George Martin’s score for the film rounds out the effort. While not considered a “proper” album, Yellow Submarine contains many memorable moments—George Harrison’s psychedelic “Only a Northern Song,” peppered with organ and candid sentiments, and “It’s All Too Much,” carried on the shoulders of a mesmerizing Mellotron, gigantic percussion, and titanic guitar feedback.

Tracks:
Side One (The Beatles)
A1 Yellow Submarine
A2 Only A Northern Song
A3 All Together Now
A4 Hey Bulldog
A5 It's All Too Much
A6 All You Need Is Love

Side two Original film score composed & Orchestrated by George Martin)
B1 Pepperland
B2 Medley: Sea Of Time & Sea Of Holes
B3 Sea Of Monsters
B4 March Of The Meanies
B5 Pepperland Laid Waste
B6 Yellow Submarine In Pepperland

Part of Capitol/Apple’s quintessential Beatles catalog masters series on LP, Yellow Submarine has been remastered by a dedicated team of engineers that includes Guy Massey, Steve Rooke, and Sam Okell with Paul Hicks and Sean Magee. Proper care and a painstaking series of steps were taken to ensure that music lovers would hear the Fab Four in all their glory with unprecedented clarity and transparency.