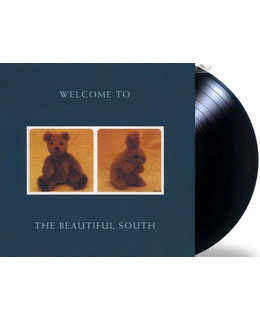 (1986) - 2018 EU remastered on standard vinyl LP- Welcome to the Beautiful South is the debut album by English band The Beautiful South. Three singles were released from the album: "Song for Whoever" , "You Keep It All In" and "I'll Sail This Ship Alone".

2018 EU remastered on stadand vinyl LP - Welcome to the Beautiful South is the debut album by English band The Beautiful South. With hits  "Woman in the Wall," "Song for Whoever" , "You Keep It All In" & "I'll Sail This Ship Alone".

The Beautiful South were an English alternative rock group formed in 1988 by two former members of the Hull group the Housemartins-Paul Heaton and Dave Hemingway-both of whom performed lead and backing vocals. Other members throughout the band's tenure were former Housemartins roadie Sean Welch (bass), Dave Stead (drums) and Dave Rotheray (guitar).

The Beautiful South's 1989 debut would be important if only to mark the partial continuance of the Housemartins' legacy. But when vocalist Paul Heaton and drummer Dave Hemmingway greeted the world with Welcome to the Beautiful South, the handshake came with a Cheshire grin. Nothing in the Beautiful South was as it seemed. Where there was jaunty, jazzy pop, crossed fingers warned of murderous lyrics.

If a single featured a fluttering flute, it was filled with familial terror. "Woman in the Wall," featuring one of the year's most memorable melodies and Heaton's plaintive lead vocal, also featured lines like "He'd enjoyed the thought of killing her before" and "when the rotting flesh began to stink." But even in the album's most gruesome moments, the streak of cynical, caustic sarcasm running through it was as clear as crop circles. This fact only made Welcome's twee goodness that much more fun, for with each well-placed barb it further proved what the Housemartins had started: pop didn't have to be stupid.