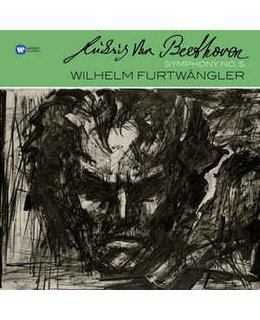 ( 1954 )-2017 EU reissue standard vinyl- The "fifth" was also his fate: Furtwängler's 'Wiener Beethoven' Beethoven's Fifth is a work of fate - not only in terms of music history, but also for record history. It was on the desks in 1913 when the first or

Beethoven's Fifth is a work of fate - not only in terms of music history, but also for record history. It was on the desks in 1913 when the first orchestral recording was made. And it was up to Wilhelm Furtwängler to guide the opus into the post-war period. His most famous recording was made in the spring of 1954 in the Vienna Musikvereinssaal. About ten months before his death, one of the greatest conductors of the 20th century offered the sum of everything that he had developed with this work over the decades.

Furtwängler's repertoire ranged from Bach to Bartók, from Handel to Hindemith, but it was Beethoven's fifth symphony in which all his musical thinking and acting culminated. No other orchestral work inspired him as strongly as this. The author John Ardoin, who thoroughly analyzed Furtwängler's phonographic legacy, even speaks of a kind of obsession. The fifth embodies Furtwängler's basic artistic idea, which he also dealt with as a music writer: the redemption of man through art, to be experienced in Beethoven's op. 67 through the tremendous departure towards the finale. Furtwängler recorded the piece for the first time in 1926. He was supposed to leave eleven records in total, most of them live. In Vienna, however, he found studio conditions - and ensured the culmination of his discography.