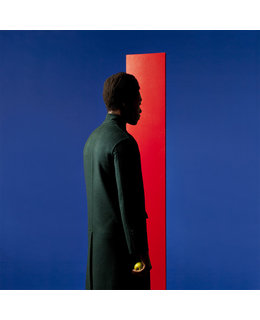 2015 EU issue on standard 2LP = Born Londoner, Discovered In Paris As Clochard/Pianist. Best album of 2015 according to The Guardian as well as winner of the 2015 Mercury Prize. Some singers have a gift: they can sweep us away to distant unforgettable pla

2015 EU issue on standard 2LP =Born Londoner, Discovered In Paris As Clochard/Pianist. Some singers have a gift: they can sweep us away to distant unforgettable places and engrave their music in our hearts & minds from the very first notes. Benjamin Clementine is that kind of iconic singer.

Best album of 2015 according to The Guardian as well as winner of the 2015 Mercury Prize.

Tracks:
LP1:
A1 Winston Churchill's Boy
A2 Then I Heard A Bachelor's Cry
A3 London
B1 Adios
B2 St-Clementine-On-Tea-And-Croissants
B3 Nemesis
LP2:
C1 The People And I
C2 Condolence
C3 Cornerstone
D1 Quiver A Little
D2 Gone
D3 Curriculum Vitae (Bonus Song)(* not written on back cover )

North London newcomer Benjamin Clementine releases his debut album, At Least For Now. Continuing a journey which has taken Benjamin from busking around Paris to a debut performance on BBC2s Later..with Jools Holland in 2013. Benjamin Clementine has packed a lot into his 25 years: heartbreak, homelessness, reinvention, before reaching cult status in Paris and returning home in unlikely circumstances. Raised in Edmonton, his household was a strictly religious one, where children were barred from the living room unless it was a weekend dinner ("my parents, even though they were quite devilish, acted like Christians, and we weren't allowed to play anything other than gospel music). When Benjamin started to teach himself the keyboard aged 11, he stumbled upon classical radio rather than contemporary pop; a sparse piano solo by Erik Satie in particular transformed the way he played. At 16 years old, in a rare moment of permitted TV watching, he caught New York avant-gardists Antony and the Johnsons performing the disarmingly naked Hope Theres Someone on the BBC. I was confused, scaredit was another world, says Clementine. When it finished, I went back upstairs to my piano and started playing chords. This beautiful 4-colour double gatefold vinyl LP includes an insert card for a free download of the track.