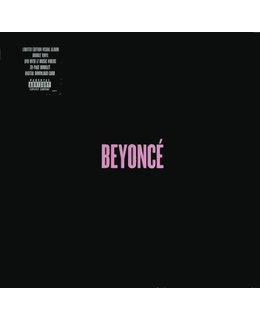 Beyonce's 2013 self-titled album is the artist's fifth solo studio effort and first visual album. Beyonce is infused with 14 new songs and 17 visually stunning, provocative videos shot around the world from Houston to New York City to Paris, and Sydney to Rio de Janeiro, all before the album's release. "I see music," says Beyoncé about her decision to create a visual album. "It's more than just what I hear. When I'm connected to something, I immediately see a visual or a series of images that are tied to a feeling or an emotion, a memory from my childhood, thoughts about life, my dreams or my fantasies. And they're all connected to the music."

While not a concept album, the record is designed to be consumed as a comprehensive audio/visual piece from top to bottom. The antithesis of making singles, the visual album is a non-linear journey through the thoughts and visions of Beyoncé. Not one to stand on past achievements, this is an artist who thrives on evolving, challenging herself and raising the bar. This creative process gave Beyonce power over her music and provided an opportunity to control how the music is heard. She is not playing by the rules and breaking what is expected, preferring to put music out as an entire body of work.

She recorded all over the world for a year and a half but the initial recording started after the writers and producers gathered under one roof in The Hamptons, New York's beach enclave, in the summer of 2012 to live together, work together and to immerse themselves into her world and into her head. The fans that have grown up with the performer, mature and seasoned enough to relate to the content and the shared experiences, inspire the music, with themes that explore love, loss, fear, anger, honesty, happiness, sexuality and confidence.

For the videos, some of which she co-directed, she preferred to work with a more care-free formula. Shot primarily during her successful "Mrs. Carter Show World Tour," the videos were veiled in secrecy, even though they were filmed in open places, including a beach in Brazil, the streets of NYC, on the famed Cyclone Rollercoaster in Coney Island, New York, downtown Los Angeles, a chateau in Paris, a roller skating rink in Houston, Texas where she skated as a child, and a beautiful church in South America. She mixed up the creative, going for big and small and set out on shoots eager to capture the spontaneity and honesty in every moment. The videos are visually stimulating, charged with visionary cinematography and clever storytelling. They capture every side of who she is, complete with vulnerability and imperfections.

Beyonce is an explosive sonic and visual communiqué to music fans from an artist who has earned the right to do things on her terms. "I just want to give my album to the people I love and respect and hope that they feel the same thing I felt when I made the music," she explained.

Tracks:
LP1
A1 Pretty Hurts
A2 Haunted
A3 Drunk In Love

B1 Blow
B2 No Angel
B3 Partition
B4 Jealous

London Grammar If You Wait