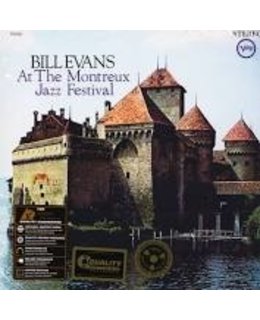 At the Montreux Jazz Festival, marks the beginning of stylistic changes for the legendary pianist. The wonderful performances that added value of live at the jazz festival in the world.

Bill Evans' 1968 release, At the Montreux Jazz Festival, marks the beginning of stylistic changes for the legendary pianist. Only one year earlier, his At Town Hall release found his approach generally more introspective and brooding. In contrast, this set is more lively, playful, and experimental. Much of this is down to the active and intense drumming of Jack DeJohnette, who had joined the trio only a short time before this concert was recorded; longtime bandmate Eddie Gomez is also featured on this album. His energetic soloing adds veracity to tunes such as "Embraceable You" and "A Sleeping Bee." DeJohnette, too, is given several opportunities to display his drumming skills. His lengthy solo on "Nardis" displays his technical prowess and four-way coordination; such acumen would later cause jazz fans and critics alike to hail DeJohnette as one of the world's premier jazz drummers. Evans, famous for a soft-spoken pianistic touch, seems driven to new vistas on this album. He experiments more with harmonic dissonance and striking rhythmical contrasts, making this his most extroverted playing since his freshman release, New Jazz Conceptions.

Bill Evans - flanked by bassist Eddie Gomez and his drummer of the period Jack DeJohnette (just prior to him joining Miles Davis) - is in excellent form on this equally brooding and bright 1968 live date At The Montreux Jazz Festival. Evans performs two of his originals (including "One for Helen" which was dedicated to his longtime manager Helen Keane), Denny Zeitlin's "Quiet Now," Earl Zindars' "Mother of Earl" and a few of his favorite standards, tunes that are generally ballads and harmonically rich.
The interplay between Evans and Gomez was growing month-by-month (the bassist had been with him for almost two years at this point) and is the main reason to acquire this Grammy Award-winning collection although DeJohnette (the only album to document his too-short stay in the trio) certainly offers up some stimulating support here as well. The proceedings sound as radiant as ever on this super-silent 200-gram vinyl LP reissue from Analogue Productions mastered by Bernie Grundman from the original analog tapes and manufactured at Quality Record Pressings.

Count Basie Live at the Sands (Before Frankf Sinatra) =MFSL=