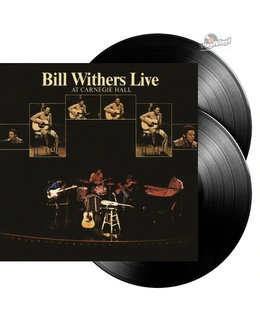 2012 EU repressing on 180g 2LP= with hits like " Ain't No Sunshine", " Lean On Me" . A wonderful live album that capitalizes on Withers' trademark melancholy soul sound while expanding the music to fit the room granted by a live show. Lovely versions of "Grandma's Hands" and "Lean on Me" are balanced by heartfelt downbeat numbers like "Better Off Dead" and "I Can't Write Left-Handed," the latter being an anti-war song with a chilling message. The set finishes off with the lengthy "Harlem/Cold Baloney," with lots of audience-pleased call-and-response going on. One of the best live releases from the '70s.