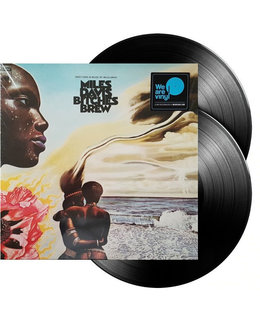 2019 EU repressing on HQ vinyl 2LP-The mercurial Bitches Brew is thought by many to be one of the most revolutionary albums in jazz history, having virtually created the genre known as jazz-rock fusion, Miles adds to his In A Silent Way concept, here with soprano saxophone bass clarinet additional drums and percussion plus African Indian and Brazilian instruments. The result was unlike any music heard before or since. A complete rejection of traditional songs chord progressions or even melodic conventions the album signified that music could be just layers of texture and sound. Bitches Brew is not just an important recording, its an essential one.

This double album was recorded in three days in August of 1969 and is often heralded as the first shot fired in the Fusion movement. Davis had already spearheaded two major Jazz movements (Cool and Modal Jazz) and was about to initiate another major change (the album's cover also sports the phrase 'Directions In Music By Miles Davis' above the title.)

Most of the musicians (a.o. Wayne Shorter, Joe Zawinul, Jack DeJohnette, Chick Corea) who played on the album went on to become giants of the 1970's Fusion movement.

Pop and Rock artists as disparate as Carlos Santana, Joni Mitchell and Radiohead cite it as an influence.

Miles Davis had recorded electric jazz before, but Bitches Brew was something else: jazz-rock. Accepting the rhythmic and improvisatory challenges of Jimi Hendrix, James Brown and Sly Stone, the trumpeter, over the course of several sessions, goaded multiple large combos to use a shifting funk pulse to guide them toward explorations more open-ended than even the freest of jazz players had attempted. These extended takes gave producer Teo Macero plenty of material to snip and splice together, a technique he may have learned from musique concrète, but helped the jazz world catch up with a discovery rock had made some time before: The studio allows for far different possibilities of creative freedom than the stage.