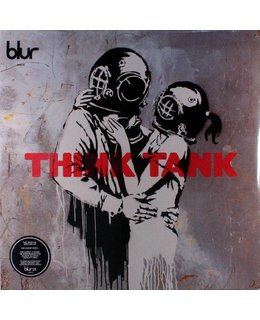 (2001) - 2012 EU reissue on 180g 2LP-Blurs seventh album began in the bands London Studio 13 late in 2001 Recording moved southwards when the band packed up the entire studio and migrated to Marrakech an...

2012 EU reissue 2LP , cut on 180gram audiophile vinyl-Blurs seventh album began in the bands London Studio 13 late in 2001 Recording moved southwards when the band packed up the entire studio and migrated to Marrakech and finishing touches were added in Devon The final thirteen tracks were selected from more than twentyfive completed songs Think Tank is Blurs only album as a three piece founding guitarist Graham Coxon was present for the initial sessions and plays on one track album closer Battery In Your Leg-housed in a replica of the original sleeve artwork, including codes to download the albums as high quality MP3.

Damon Albarn is known for a myriad of successes throughout his career that include leading the widely popular band Blur in the 1990s through the early 2000s, as well as his genius work as the unsuspecting leader of Gorrillaz starting in 2001. Although many of his albums could have found their way onto this list, Think Tankbelongs here not only for the musical beauty of the album, but also because it has a rare commercially-released cover by the widely popular graffiti artist Banksy; a genius in his own art realm. If not for the beautiful album of music contained on the vinyl, framing the cover and hanging it near your record player will be an easily appreciated musical and artistic conversation piece to say the least.