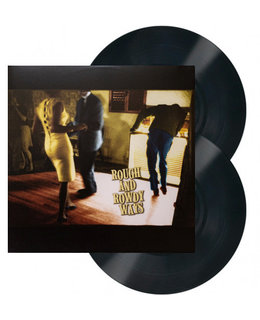 2020 EU issue 2LP 180 grams vinyl - Dylan's newest Album in 2020 ‘Rough and Rowdy Ways’ is Bob Dylan’s first album of original songs in eight years. The album has ten songs and includes False Prophet, I Contain Multitudes and the epic, almost 17 minut long, Murder Most Foul, that were released ahead of the album release.

It is Dylan's first studio album since he won the Nobelprice for Literature in 2016. In the past 23 years Dylan has released 7 studio albums and has won an Oscar and a Golden Globe in 2001 for Things Have Changed, that was featured in the movie Wonderboys. His memoirs, Chronicles Vol. 1, is a worldwide besteller and Dylan has eceived the Presidential Medal of Freedom in 2012 and the Officier de la Legion d'honneur in 2013. Worldwide he has sold over 125 million albums and Rough and Rowdy Ways it his 39th album.

Tracks:
A1 I Contain Multitudes
A2 False Prophet
A3 My Own Version Of You

Bob Dylan Bringing it All Back Home = vinyl LP =