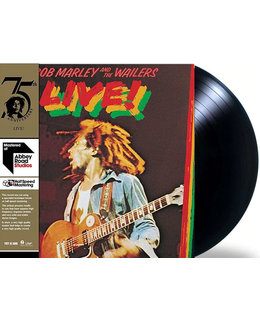 ( 1975 ) 2020 EU Half-Speed remaster vinyl LP -features live versions of Trenchtown Rock "No Woman No Cry", " I Shot The Sheriff" & "Get Up Stand Up" This 1975 set showcases Marley's magnetic stage appeal, but it's the final three songs (including a trul

2020 EU Half-Speed remaster vinyl LP -  features live versions of Trenchtown Rock "No Woman No Cry", " I Shot The Sheriff" & "Get Up Stand Up". Recorded in London during Bob Marley and the Wailers' 1975 tour, 'Live!' – like a handful of other concert recordings over the years – is a career-defining album that came near to transcending the band's recent exemplary studio work. The entire set showcases Marley's magnetic stage appeal, but it's the final three songs (including a truly revelatory take of "No Woman, No Cry") that make this one of the era's all-time greatest live LPs. Presented in a sealed picture sleeve

As the title implies, this is indeed Bob Marley & the Wailers captured in performance at the Lyceum Ballroom in London during the final U.K. leg of the Natty Dread tour. Passionate and symbiotic energies constantly cycle between the band and audience, the net result of which is one of the most memorable concert recordings of the pop music era. With the addition of lead guitarist Al Anderson during the recording sessions for their previous long-player, Natty Dread, the Wailers took increasing strides toward a seamless transition into the consciousness of the rock music audience. Anderson's bluesy guitar runs liberate "Burnin' and Lootin'" as well as "Trench Town Rock," the only new composition on Live! Anderson bobs and weaves his supple-toned fretwork among the somewhat staid rhythms common to reggae. The mutual affinity that binds Marley with his audience is evident in the roars of approval that greet the opening notes of "Them Belly Full (But We Hungry)," "I Shot the Sheriff," and "Kinky Reggae." Likewise, "No Woman, No Cry" elicits a group singalong as the sheer volume of the audience challenges that of the amplified musicians. With this evidence, there is no denying that Bob Marley & the Wailers were becoming the unlikeliest of pop music icons. Additionally, Live! underscores the underrated talents of the Wailers as musicians. Older works such as "Burnin' and Lootin'" and "I Shot the Sheriff" benefit greatly from Tyrone Downie's keyboard punctuation and the soulful backing vocals of the I-Threes.