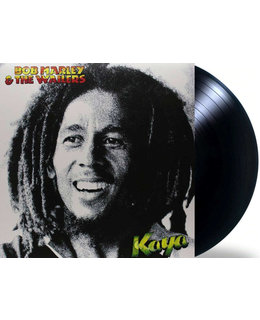 2015 EU reissue on 180g vinyl LP -with classics like "Is This Love," "Sun Is Shining," "Time Will Tell" and "Satisfy My Soul" . Kaya(1978) The album finds Bob Marley & The Wailers truly capitalizing on their newfound international success.  The 10-song set captures Marley and company in a relaxed mood on a spiritual and distinctive collection of love songs, and of course, homages to the power of ganga.

Tracks:
A1 Easy Skanking
A2 Kaya
A3 Is This Love
A4 Sun Is Shining
A5 Satisfy My Soul

B1 She's Gone
B2 Misty Morning
B3 Crisis
B4 Running Away
B5 Time Will Tell
Bonus Track :
B6 Smile Jamaica (Version)

Exodus was still in the UK chart when its follow-up Kaya was released on 23 March, 1978. This was a testament not only to Bob Marley’s phenomenal popularity at this point but also to the man’s impressive work ethic and his ability to shrug off a worsening health problem.

Kaya, like Exodus before it, was recorded in London, during Marley’s period of “exile” from Jamaica, and is often referred to as a sister album to Exodus. But the two collections could hardly have offered more of a contrast in tone. After the apocalyptic visions and majestic peaks of Exodus, the musical ambience of Kaya reflected a more peaceful and harmonious state of mind. “Kaya” is Jamaican street-slang for “dope” and an airy mood of gently-stoned benevolence radiated from the album’s grooves, a vibe underlined by the picture of a ganja plant which graced the back-cover artwork.