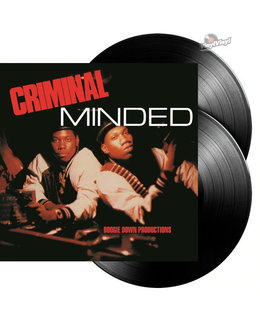 (1989) - 2018 EU reissue on standard 2LP= Criminal Minded is widely considered the foundation of hardcore rap, announcing its intentions with a cover photo of KRS-One and Scott La Rock (on his only album with Boogie Down Productions) posing with weapons -

Criminal Minded is widely considered the foundation of hardcore rap, announcing its intentions with a cover photo of KRS-One and Scott La Rock (on his only album with Boogie Down Productions) posing with weapons -- an unheard-of gesture in 1987.

BDP weren't the first to rap about inner-city violence and drugs, and there's no explicit mention of gangs on Criminal Minded, but it greatly expanded the range of subject matter that could be put on a rap record, and its grittiest moments are still unsettling today. Actually, that part of its reputation rests on just a handful of songs. Overall, the record made its impact through sheer force -- not only KRS-One's unvarnished depictions of his harsh urban environment, but also his booming delivery and La Rock's lean, hard backing tracks (which sound a little skeletal today, but were excellent for the time). It's important to note that KRS-One hadn't yet adopted his role as the Teacher, and while there are a few hints of an emerging social consciousness, Criminal Minded doesn't try to deliver messages, make judgments, or offer solutions. That's clear on "South Bronx" and "The Bridge Is Over," two of the most cutting -- even threatening -- dis records of the '80s, which were products of a beef with Queens-based MC Shan. They set the tone for the album, which reaches its apex on the influential, oft-sampled "9mm Goes Bang." It's startlingly violent, even if KRS-One's gunplay is all in self-defense, and it's made all the more unsettling by his singsong ragga delivery. Another seminal hardcore moment is "Remix for P Is Free," which details an encounter with a crack whore for perhaps the first time on record. Elsewhere, there are a few showcases for KRS-One's pure rhyming skill, most notably "Poetry" and the title track. Overall it's very consistent, so even if the meat of Criminal Minded is the material that lives up to the title, the raw talent on display is what cements the album's status as an all-time classic.

Tracks:
A1 Poetry
A2 South Bronx
B1 9mm Goes Bang
B2 Word From Our Sponsor
B3 Elementary
C1 Dope Beat
C2 Remix For P Is Free
C3 The Bridge Is Over
D1 Super-Hoe
D2 Criminal Minded
D3 P Is Free (Original 12" Version)