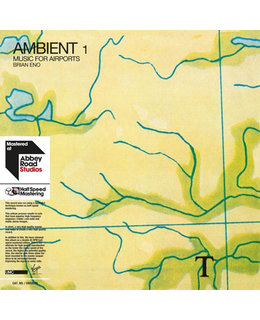 2018 EU reissue on Deluxe Gatefold 180g 45RPM 2LP-Eno's landmark Ambient album from 1978 has been Half Speed Mastered by Miles Showell at Abbey Road Studios, London and is now presented in a gatefold sleeve on 2 180 gram discs which have been cut at 45rpm

2018 EU reissue on Deluxe Gatefold 180g 45RPM 2LP -Eno's landmark Ambient album from 1978 has been Half Speed Mastered by Miles Showell at Abbey Road Studios, London and is now presented in a gatefold sleeve on 2 180 gram discs which have been cut at 45rpm for a superior listening experience. Complete with an Obi and Abbey Road Certificate of Authenticity and contains a Download Voucher.

Though not the earliest entry in the genre (which Brian Eno makes no claim to have invented), 1978's Ambient 1 (Music For Airports) was the first album ever to be explicitly labelled ‘ambient music'. Eno had previously created similarly quiet, unobtrusive music on albums Evening Star, Discreet Music, and Harold Budd's The Pavilion of Dreams (which he produced), but this was the first album to give it precedence as a cohesive concept.

Eno conceived the idea for Music For Airports while spending several hours waiting at Cologne Bonn Airport, becoming annoyed by the uninspired sound and the atmosphere it created. The recording was designed to be continuously looped as a sound installation, with the intent of defusing the tense, anxious atmosphere of an airport terminal, by avoiding the derivative and familiar elements of typical ‘canned music'. The album features contributions from Robert Wyatt and Rhett Davies. Ambient 1 (Music For Airports) was followed by Harold Budd and Brian Eno's Ambient 2 (The Plateaux of Mirror) and Ambient 3 (Day Of Radiance) by Laraaji, which was also produced by Eno.

This record was cut using a specialist technique known as half-speed mastering. This artisan process results in cuts that have superior high frequency response (treble) and solid and stable stereo images. In addition, it is presented as a double 45RPM half-speed mastered edition. This is the ultimate for high quality reproduction as the faster the replay speed of the record, the higher the potential quality. Also, the shorter side times allow the level recorded to the master lacquer discs to be increased thereby improving the signal to the noise ratio.