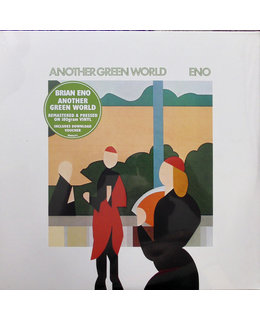 2017 EU reissue on 180g vinyl LP- including 6 songs in which he plays all the instruments himself; Rolling Stone called this 1975 album "a major triumph, an important record - and also a brilliant one,""In Dark Trees," "The Big Ship," "Another Green World," "Sombre Reptiles," "Little Fishes" and "Spirits Drifting."

A universally acknowledged masterpiece, Another Green World represents a departure from song structure and toward a more ethereal, minimalistic approach to sound.

With experimentalism, conceptual art theory and use of the accidental as a foundation, these albums broke through the boundaries of popular music at the time. Elements of prog/psych/art rock, avant garde and 50s rock ‘n' roll were combined with an array of cultural and philosophical ideas to create fresh sounding music, that was both visionary and captivating. Alongside George Martin and The Beatles' work on Sgt. Pepper's, Eno is arguably the other most pre-eminent practitioner of ‘studio as instrument' ever. His unconventional recording techniques have resulted in a canon of work that places him alongside other iconic producers like Brian Wilson, Lee Scratch Perry and Phil Spector. As these albums progress chronologically, a nascent form of music begins to emerge. The ideas we hear in this early work continue to reveal themselves in Eno's later ambient and electronic experiments.

From its release in 1975 to today, Another Green World has been heaped with accolades. At the time, Village Voice described "the aural equivalent of a park on the moon" and Rolling Stone called it "a major triumph, an important record - and also a brilliant one," whilst recently Q dubbed it "breathtakingly ahead of its time." The album's music veers from the experimental sounds of Eno's previous albums - based loosely around rock - to the more meditative, synth-oriented instrumental minimalism of his subsequent work. Produced by Eno and Rhett Davies, like his previous solo efforts, Eno had several guest musicians contribute to Another Green World: Robert Fripp, John Cale, Phil Collins and his fellow brand X member Percy Jones. Unlike his previous albums, Eno worked on more solo material, including 6 songs in which he plays all the instruments himself; "In Dark Trees," "The Big Ship," "Another Green World," "Sombre Reptiles," "Little Fishes" and "Spirits Drifting."

Brian Eno Before and after Science =180g vinyl =