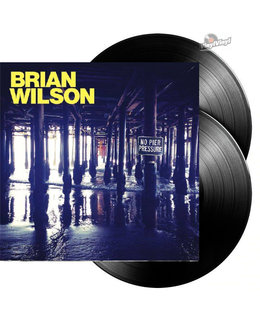 Label:  Capitol
Availability:   In Stock
Delivery time:
€22,95 Incl. VAT (BTW)
Release date: 01-06-2015
2015 EU issue on 180g vinyl 2xLP -New Album features Collaborations with Beach Boys Bandmates, Kacey Musgraves, Fun.’s Nate Ruess, She & Him’s Zooey Deschanel and M. Ward, Peter Hollens & Capital Cities’ Sebu Simonian
He is one of popular music’s most deeply revered figures, a legendary writer, producer, arranger and performer of some of the most cherished music in pop music history. Indeed, it is no exaggeration to call Brian Wilson one of the most gifted and influential composers of the past 50 years. For the release of his 11th solo studio album, titled No Pier Pressure, Wilson has returned to Capitol Records, his original label home with The Beach Boys.
Tracks:(2LP's)
A1. This Beautiful Day
A2. Runaway Dancer [featuring Sebu Simonian]
A3. What Ever Happened [featuring Al Jardine and David Marks]
A4. On The Island [featuring She & Him]
B1. Our Special Love [featuring Peter Hollens]
B2. The Right Time [featuring Al Jardine and David Marks]
B3. Guess You Had To Be There [featuring Kacey Musgraves]
B4. Tell Me Why [featuring Al Jardine]
C1. Sail Away [featuring Blondie Chaplin and Al Jardine]
C2. One Kind Of Love
C3. Saturday Night [featuring Nate Ruess]
C4. The Last Song
D1. Half Moon Bay
D2. Don’t Worry
D3. I’m Feeling Sad
D4. Somewhere Quiet
For the No Pier Pressure sessions, Wilson reunited with longtime collaborator Joe Thomas, with whom he co-produced The Beach Boys’ No. 3 Billboard album That’s Why God Made The Radio for the iconic band’s 50th anniversary reunion in 2012. In addition, Wilson was  joined at Hollywood’s Ocean Way Studios by talented musicians he personally invited to record with him, including his former Beach Boys bandmates Al Jardine, David Marks and Blondie Chaplin, as well as Kacey Musgraves, Fun.’s Nate Ruess, She & Him’s Zooey Deschanel and M. Ward, Peter Hollens, Capital Cities’ Sebu Simonian, and trumpet master Mark Isham. Wilson has also brought in session all-stars Don Was, Jim Keltner, Dean Parks, and Kenny Aronoff. Members of Wilson’s longtime touring band, including Scott Bennett, Paul Mertens, Darian Sahanaja, and Probyn Gregory also participated in the sessions, along with Matt Jardine, son of Al Jardine, and former bandmate Jeffrey Foskett.
Wilson and Thomas began collaborating on the new songs during The Beach Boys’ whirlwind 50th anniversary activities throughout 2012, a banner year for the band which also included a Grammy Award win for Brian for The Beach Boys’ long-awaited SMiLE Sessions release. He told family, friends, and journalists around the world that he looked forward to returning to the studio when he got back home to California.
Always most inspired when creativity is given time and space to freely flow, Wilson initially envisioned the sessions for his new album with The Beach Boys in mind, but that was not to be. Wanting to find the right voices to complete his vision, Wilson saw an opportunity to finally become hip with his kids and recruited some amazing young vocalists who have been inspired by his music to do the job.
Throughout his iconic career, Wilson has brought ingenious vision to his own compositions, as well as to those for which he has collaborated, weaving a lush, vibrant tapestry of intricately nuanced vocal harmonies and instrumental arrangements for himself, his bandmates and others. For more than 50 years, fans have marveled at the sheer beauty of the music that springs forth from Wilson’s imagination into glorious song.
Camped out at Ocean Way, Wilson took a fluid, woodshedding approach to the recording process, deftly tailoring the vocal and instrumental parts and arrangements to each participant. Wilson worked to hone the arrangements, often assembling pieces from various takes, a signature style of recording he has enjoyed since his earliest sessions with The Beach Boys. In fact, several of the songs were written during the recording process.
Brian Wilson began his career as a teenaged founding member of The Beach Boys, who signed with Capitol Records in July 1962 and released their first album, Surfin’ Safari, that same year. The band’s initial surf-rock focus was soon broadened to include other themes, and 1966’s Pet Sounds is universally hailed as one of the greatest albums of all time. Wilson’s innovative vocal and instrumental arrangements for major hits including “I Get Around,” “California Girls,” “Wouldn’t It Be Nice,” “God Only Knows,” and the No. 1 smash “Good Vibrations” made The Beach Boys America’s preeminent band of the 1960s.
Wilson has also achieved great solo success with 10 of his own albums released to date, including his acclaimed 2004 completion of an album he first began recording in the ‘60s, Brian Wilson Presents… SMiLE, which reached Billboard’s Top 20 and earned him his first Grammy Award for a recording. Wilson won his second Grammy Award for producing The Beach Boys’ acclaimed 2011 release, The SMiLE Sessions. Wilson has also performed major, sold-out SMiLE and Pet Sounds tours in recent years with his own band. Wilson is a Kennedy Center Honors recipient, a Songwriters Hall of Fame inductee, and a UK Music Hall of Fame inductee. As a member of The Beach Boys, Wilson was inducted into the Rock and Roll Hall of Fame in 1988 and honored with The Recording Academy’s Lifetime Achievement Grammy Award in 2001.
Discs: 2
Drager(LP,EP,12,7,CD): LP
Qual(120grs,150grs,180grs): 180grs
Speed(33,45): 33
Label: Capitol
This release: 2015