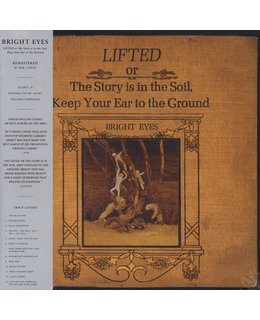 Bright Eyes
LIFTED or The Story Is In The Soil Keep Your Ear To The Ground =2016 remastered=
2 x LP   180grs   33⅓rpm     Remastered edition comes in gatefold tip-on jacket with download code .    + bonus download

When Bright Eyes brainchild Conor Oberst issued Lifted or The Story Is in the Soil, Keep Your Ear to the Ground in August 2002, he was 22 years old. Critics were already calling him the "indie Bob Dylan," but the new millennium had seen a lot of those introverted, intelligent types (Ryan Adams, Beck). Bright Eyes, though, delivered a solid, intricately produced album without the majors' monotony. Immediately, one can sense Oberst's literate approach. His vocal curdle is abrasive yet warm. It's similar to the cooing of Robert Smith, but lush in heartache like Paul Westerberg, leaving the storybook of Lifted or The Story to earn massive praise. "Waste of Paint" is rough-cut with edgy acoustics, while "From a Balance Beam" glows with pop-like optimism. Chimes and simple drumming keep the story of personal insecurity and the fear of the unknown coming alive in a dreamy sort of way. Even when he's aching his way through the pop rumble of "Method Acting," Bright Eyes convincingly lures one into his eclectic musical world. Oberst obviously has the talent to support the hype. "Lover I Don't Have to Love" is a dark number with its Radiohead-like doom and gloom; however, the piano swirl of "A Bowl of Oranges" offers a brighter reflection. On Lifted or The Story Is in the Soil, Keep Your Ear to the Ground, Bright Eyes has mixed badness with beauty for a sonic storybook that relates to everyone. It's slightly overwhelming at first, but one must allow a grace period to fully absorb the abstract desire behind this album.