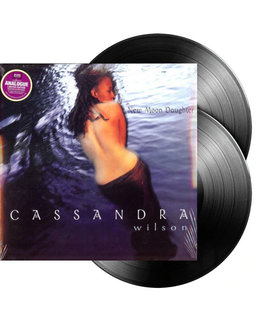 Tracks:(2LP's)
A1. Strange Fruit
A2. Love Is Blindness
A3. Solomon Sang

Cassandra Wilson's own excellent, jazz tinged compositions sit alongside a stunning set of ingenious covers from a highly diverse spectrum of composers. "Last Train To Clarksville" is transformed from a catchy pop song into a stripped-down and genuinely effective jazz vocal work-out. "Harvest Moon" slows down Neil Young's already wistful ballad to an almost painful level and, in so doing, takes it to an even higher level of gentle reflection.

Hank Williams' "I'm So Lonesome I Could Cry" and U2's "Love Is Blindness" are transformed into three in the morning jazz club classics. The vocals and backing to Robert Johnson's "32-20" are simplified to the point where only the essence of the blues is allowed to shine and, Lewis Allan's "Strange Fruit" becomes as desolate and challenging as it's horrific lyrics. Clever, very effective and worth the required effort!