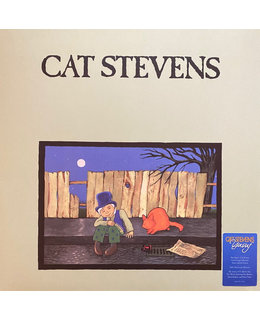 ( 1971 ) - 2021EU reissue vinyl LP -Teaser and the Firecat contains 10 songs including hits such as "Morning Has Broken," "Moonshadow," and "Peace Train." It is also the title of a children's book written and illustrated by Stevens.

2021 EU reissue on 180g vinyl LP = celebrates 1971's landmark album 'Teaser and the Firecat' with a remastered 50th anniversary set completed at Abbey Road Studios, and overseen by original album producer, Paul Samwell-Smith -Teaser and the Firecat is an album released by Cat Stevens in 1971. It contains 10 songs including hits such as "Morning Has Broken," "Moonshadow," and "Peace Train." It is also the title of a children's book written and illustrated by Stevens. The story features the title characters from the album cover, top-hatted young Teaser and his pet Firecat, who attempt to put the moon back in its place after it falls from the sky. Published in 1972, the book has been out of print since the mid-1970s.

Tracks:
A1 The Wind
A2 Rubylove
A3 If I Laugh
A4 Changes IV
A5 How Can I Tell You

Even as a serious-minded singer/songwriter, Cat Stevens never stopped being a pop singer at heart, and with Teaser and the Firecat he reconciled his philosophical interests with his pop instincts. Basically, Teaser's songs came in two modes: gentle ballads that usually found Stevens and second guitarist Alun Davies playing delicate lines over sensitive love lyrics, and uptempo numbers on which the guitarists strummed away and thundering drums played in stop-start rhythms.

Cat Stevens Tea for the Tillerman 2