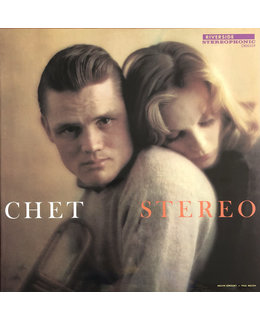 ( 1959 ) 2021 EU acoustic - All-Analog 180g HQ Vinyl LP= Every musician has his area of expertise and for Chet Baker that area was the ballad. Therefore, this album dedicated entirely to ballads, gives listeners a chance to hear Baker doing what he does

2021 EU reissueEvery musician has his area of expertise and for Chet Baker that area was the ballad. Therefore, this album dedicated entirely to ballads, gives listeners a chance to hear Baker doing what he does best and when Chet Baker does what he does best, he does it better than any other trumpet player in the history of jazz.

For this session, recorded on the 30th of December 1958 at NYC’s Reeves Sound Studios, the poster child of West Coast cool jazz (who had just turned 29) assembled a superlative East Coast sextet that featured the unusual front-line combination of flute (Herbie Mann), trumpet (Baker) and baritone (Pepper Adams), departing occasionally from this format, however, to showcase the guitar playing of Kenny Burrell.

Bill Evans (piano), Philly Joe Jones (drums), Paul Chambers (bass), all well-known for their association with Miles Davis, and all some of the top names in jazz are also featured here, along with drummer Connie Kay of the Modern Jazz Quartet. Chet represents some of the last studio work Baker did before emigrating permanently to Europe. It also includes one of Baker’s own compositions, “Early Morning Mood,” recorded at the same studio and with the same line-up on the 19th of January 1959.

Chet Baker's penultimate session for Riverside -- which was strictly instrumental -- produced an all-star lineup to support him, including jazz heavyweights Pepper Adams, Bill Evans, and Kenny Burrell. Each of them makes important contributions to the session. Adams' baritone sax solo on "Alone Together" is one of the album's high points, while Herbie Mann and Bill Evans make their presence known on several cuts. Baker possessed one of the most melodious trumpets in jazz, compelling in its simplicity. Rarely extending his range above a single octave, he nonetheless had few peers when it came to slow, romantic ballads, which make up the playlist here. His characteristically soft approach is heard to good effect on "It Never Entered My Mind," where he works with the guitar of Kenny Burrell. Burrell and Baker also collaborate on a moving rendition of "September Song." Chet is a good place to hear Baker's special way with the horn, and is made even more attractive with the presence and contributions of top jazz artists.

Chet Baker Touch of Your Lips