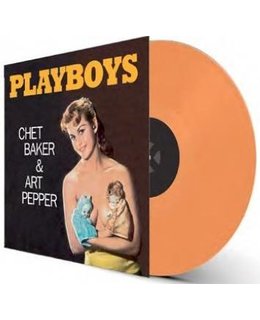 ( 1956 ) - 2018 EU repressed on 180g coloured vinyl LP = The collaborations between Chet Baker and Art Pepper were originally issued in such a disparity of ways that it might seem difficult ...

2010 EU  DMM cutting repressed on 180gram VIRGIN VINYL=  The collaborations between Chet Baker and Art Pepper were originally issued in such a disparity of ways, that it might seem difficult at first to think about them as a coherent body of work. presented in sealed & stickered sleeve.

These 1956 Pacific Jazz sides appeared in 1961 under the title Playboys. Myth and rumor persist that, under legal advice from the publisher of a similarly named magazine, the collection would have to be retitled. It was renamed Picture of Heath, as more than half of the tracks are Jimmy Heath compositions. Regardless, the music is the absolute same. These are the third sessions to feature the dynamic duo of Art Pepper (alto sax) and Chet Baker (trumpet). Their other two meetings had produced unequivocal successes. The first was during a brief July 1956 session at the Forum Theater in L.A. Baker joined forces with Pepper's sextet, ultimately netting material for the Route LP. Exactly three months to the day later, Pepper and Baker reconvened to record tracks for the Chet Baker Big Band album. The quartet supporting Baker and Pepper on Playboys includes Curtis Counce (bass), Phil Urso (tenor sax), Carl Perkins (piano), and Larance Marable (drums). Baker and Pepper have an instinctual rapport that yields outstanding interplay. The harmony constant throughout the practically inseparable lines that Baker weaves with Pepper drives the bop throughout the slinky "For Minors Only." The soloists take subtle cues directly from each other, with considerable contributions from Perkins, Counce, and Marable. With the notorious track record both Baker and Pepper had regarding other decidedly less successful duets, it is unfortunate that more recordings do not exist that captured their special bond. These thoroughly enjoyable and often high-energy sides are perfect for bop connoisseurs as well as mainstream jazz listeners.