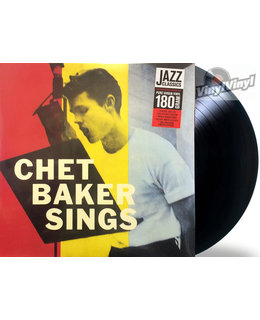 ( 1954 ) - 2011 EU reissue on 180q vinyl- Chet Bakers 1954 classic debut as a singer showcases with 14 finally phrased songs revealing a voice full of tenderness and beauty. Recorded with pianist Russ Freeman, including "My Funny Valentine," of course

2011 EU reissue on 180g  LP-Recorded with pianist Russ Freeman's ensemble in 1954 and 1956, this is the archetypal Baker release, and the first one to get if you're testing the waters. Baker sings standards (including "My Funny Valentine," of course) as if stepping out of an androgynous dream, although it would take another 20 years of hard living for his voice to take on otherworldly qualities. Relaxed West Coast swing such as this can't be duplicated today. In its sweetly melancholic post- war foreboding, this is a Mike Davis book set to music. "Sings" should be on the required listening list for any history class covering the city of L.

Chet Bakers classic debut as a singer origially released as a 10 inch long player, this album was a revelation and won Baker new frame and a new audience. This reissued as a fulllength LP with additional tracks from later sessions here, are 14 finally phrased songs revealing a voice full of tenderness and beauty.