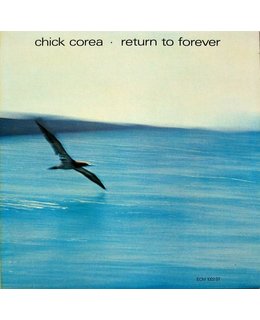 2010 German ECM reissued on 180g LP-1972's Return to Forever is one the defining jazz
albums of all time. Even after his stint with Miles Davis, and his increasingly
inventive solo albums, nothing could have prepared listeners for the jaw-dropping
beauty of this album. Chick Corea, behind the electric keyboard, leads a brand-new
band through four of his compositions, all of them now classics. Stanley Clarke – one
of Chick's most enduring musical partners – makes his first appearance here on bass,
along with the great Joe Farrell on saxophone and flute, Airto on percussion, and the
stunning vocalist Flora Purim. The sound is distinctly electric, tinged with Brazilian
percussion and an enduring warmth that had never been achieved on a plugged-in jazz
album before.

Return to Forever is an album for the ages. 180-gram high-quality
audiophile vinyl reissue from ECM.

Ahmad Jamal/Trio But Not For Me