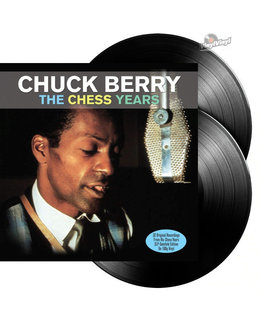 2013 UK issue on 180g vinyl 2LP =Most of Chuck Berry's fame is based on the recordings he made for Leonard and Phil Chess of CHESS Record Company between 1955 and 1966. During this time, Chuck Berry recorded all the classic numbers such as Sweet Little Sixteen, Memphis, Tennessee, Johnny B. Goode or Roll Over Beethoven. These songs have been covered and covered again by many other artists such as the Beatles, the Rolling Stones, the Beach Boys and almost every other Rock 'n' Roll singer and band.

A pioneer of Rock ‘n’ Roll Chuck Berry hit the Billboard charts running in 1955 with ‘Maybellene’ the first of a number of mainstream hits including ‘Roll Over Beethoven’, ‘School day’ and ‘Sweet Little Sixteen. Also the composer of the inspirational ‘Johnny B. Goode’ which features in the now infamous scene in Back To The Future as well as ‘Back In The USA’ later parodied by Paul McCartney for ‘Back in the USSR’.Still performing today these 32 tracks represent Berry at his best.