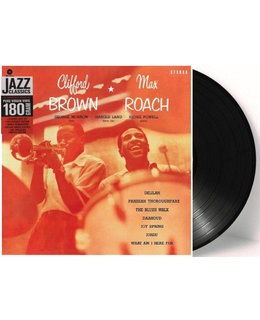 2010 EU repressing on 180g LP= Clifford Brown & Max Roach is a 1955 album by influential jazz musicians Clifford Brown and Max Roach as part of the Clifford Brown and Max Roach Quintet, described by The New York Times as "perhaps the definitive bop group until Mr. Brown's fatal automobile accident in 1956". The album was critically well received and includes several notable tracks, including two that have since become jazz standards. The album was inducted into the Grammy Hall of Fame in 1999.  It is included in Jazz: A Critic's Guide to the 100 Most Important Recordings at #34, where it is described by New York Times jazz critic Ben Ratliff as "one of the strongest studio albums up to that time".

Tracks:
A1 Delilah
A2 Parisian Thoroughfare
A3 The Blues Walk

According to the original 1955 liner notes to Clifford Brown and Max Roach, the announcement that Clifford Brown and Max Roach had begun recording and playing together sent shock waves throughout the jazz community and predictions ran rampant about how the two might shape bop to come. The last duo to really shape the music had begun over ten years earlier, with the relationship between Bird and Diz. This recording was early fruit from a tree that would only live as long as Clifford Brown was around to water it (1956, the year of his tragic auto accident). The result is by far some of the warmest and most sincere bebop performed and committed to tape. Brown's tone is undeniably and characteristically warm, and he keeps the heat on alongside Roach's lilting vamps and pummeling solos. What really keeps this record on the orange side of things (other than the decidedly orange cover) is the solo work of saxophonist Harold Land, who plays part Bird and part Benny Goodman. His tone is as delightful as it gets on the sultry "Deliah" and as bop-expressive as it gets on "The Blues Walk" and "Parisian Thoroughfare," where he and Brownie go head to head blowing expressive runs of sheer New York-style jazz. This collection of songs runs a nice gamut between boplicity and pleasant balladry. It represents bop at its best and is recommended for collectors and casual fans alike. [The 2000 Verve reissue includes alternate takes of "The Blues Walk," "Daahoud," and "Joy Spring."]