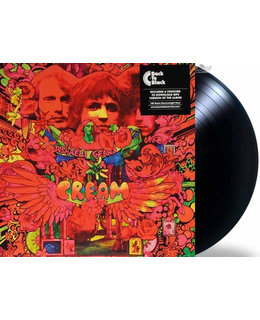 ( 1967 ) - 2015 EU reissue on 180g LP+download -with the timeless classics." Tales of Brave Ulysses" , " SWLABR," " Strange Brew" and " Sunshine of Your Love". .It was the landmark record Disraeli Gears, that turned Cream into the greatest super group of

2015 EU reissue on 180g  LP+download -It was the landmark record Disraeli Gears, that turned Cream into the greatest super group of all time and the one against, which all others would be compared to after. The albums masterful blend of psychedelic blues and strong pop songwriting sensibilities awarded. the timeless classics. Tales of Brave Ulysses, SWLABR,Strange Brew and Sunshine of Your Love.

Tracks:
A1. Strange Brew
A2. Sunshine Of Your Love
A3. World Of Pain
A4. Dance The Night Away
A5. Blue Condition

B1. Tales Of Brave Ulysses
B2. SWLABR
B3. We're Going Wrong
B4. Outside Woman Blues
B5. Take It Back
B6. Mother's Lament

Cream soon evolved further creating a trademark approach built around each musician’s virtuoso playing. Their live performances became renowned for lengthy improvisational pieces based on traditional blues structures such as "Crossroads" and "Spoonful," modern blues such as "Born Under A Bad Sign," and their own songs such as "White Room" and Baker’s powerhouse showcase "Toad."

Following their first hit single "I Feel Free" in January 1967, Cream’s debut, Fresh Cream, set the tone for the group’s inventive mix of blues standards and more eccentric original material and reached No. 6 in the UK album charts. It offered a unique blend of blues like Robert Johnson’s "Four Until Late" and Skip James’ "I’m So Glad" and creative originals such as "Dreaming" and the instrumental "Cat’s Squirrel."

Before the end of the year, Cream released the follow-up Disraeli Gears, its distinctive Day-Glo psychedelic cover designed by underground illustrator Martin Sharp. Recorded in May in New York during their first American tour, it includes landmark songs such as "Strange Brew," the melodic but heavy-riffing "Sunshine Of Your Love" and more surrealistic, wah-wah drenched "Tales Of Brave Ulysses"; in all a brilliant, textured, multi-dubbed sound that went beyond blues