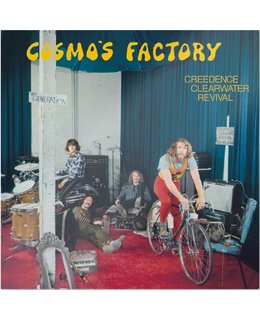 2020 Half-Speed remaster on 180 vinyl LP  = 50th anniversary pressing of iconic studio album from America's greatest rock and roll band; first released in 1970 at the peak of Creedence's prolific career. Includes the Billboard Top 10 hits “Who’ll Stop The Rain,” “Travelin’ Band,” “Run Though the Jungle,” “Up Around The Bend,” “Looking Out My Back Door” and “Long as I Can See The Light” as well as the enduring favorites, “As Long as I See The Light” and the remarkable cover of Marvin Gaye’s “I Heard It Through The Grapevine.” The album was mastered at half-speed at Abbey Road Studios, benefiting from an exacting process that allows for an exceptional level of sonic clarity and punch.

Featured here are staples like “Travelin’ Band,” “Lookin’ Out My Back Door,” “Who’ll Stop the Rain,” “Run Through the Jungle” and covers of material by Marvin Gaye (CCR’s signature take on “I Heard it Through the Grapevine”), Bo Diddley, Roy Orbison and Arthur “Big Boy”

Unquestionably one of the greatest American rock bands ever, Creedence Clearwater Revival will best be remembered for their unique bayou sound popularized in songs like "Proud Mary" and "Green River." Although their music evoked the raw, gospel-tinged sound of the rural South, Doug Clifford, Stu Cook, and Tom and John Fogerty actually hailed from El Cerrito, California, a small town near Berkeley.

The 1968 release of the band's debut album Creedence Clearwater Revival paralleled the flowering of the San Francisco music scene, but the Creedence phenomenon had little in common with the "San Francisco Sound." That first LP contained rock standards such as Dale Hawkins's "Susie Q" and Screamin' Jay Hawkins's "I Put a Spell on You," as well as original material by John Fogerty, who was to emerge as one of rock's most influential songwriters.

With the release of their second album, Bayou Country, which was home to such classics as “Proud Mary” and “Born on the Bayou,” it became evident that Creedence had an uncanny knack for writing hits. Third album Green River and songs like "Bad Moon Rising" and the title track and fourth album Willy and the Poor Boys and cuts like "Down On The Corner" and "Fortunate Son" propelled the band ever further towards greatness.

Fifth album Cosmo's Factory, the name drummer Doug "Cosmo" Clifford gave CCR's rehearsal studio because so many hits were created there, lived up to its namesake in spades. Cosmo’s Factory was the fourth and biggest of the string of five Top 10 albums CCR released in 1969 and 1970. Featured here are staples like “Travelin’ Band,” “Lookin’ Out My Back Door,” “Who’ll Stop the Rain,” “Run Through the Jungle” and covers of material by Marvin Gaye (CCR’s signature take on “I Heard it Through the Grapevine”), Bo Diddley, Roy Orbison and Arthur “Big Boy” Crudup. By 1970, CCR had undeniably become the number one American rock and roll attraction.