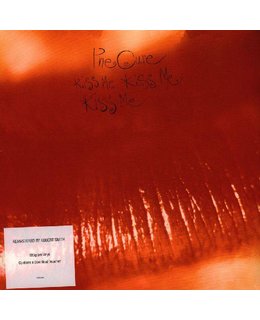 2016 EU reissue on 180g 2LP+download-In 1987 goth rock new wave legends The Cure released their platinum-certified seventh studio album, Kiss Me, Kiss Me, Kiss Me, an immense double album of extreme and extraordinary stylistic range which refined the band's eclectic ambitions and spawned their first U.S. Top 40 hit, "Just Like Heaven," as well as the U.K. hits "Why Can't I Be You?," "Hot Hot Hot!!!" and "Catch." The 2013 Record Store Day release will be reactivated in 2016 on 180-gram double vinyl.

Tracks:
LP1:
A1 The Kiss
A2 Catch
A3 Torture
A4 If Only Tonight We Could Sleep

-Kiss Me Kiss Me Kiss from 1987 was the Cure’s 6th studio album and finds them at their most prolific as it was a bumper 2LP set containing 18 tracks including the singles, “Catch”, “Why Can’t I Be You”, “Just Like Heaven” and “Hot Hot Hot !!!”. KMKMKM is both eclectic and accessible in equal measures and is often cited by fans, along with Disintegration from 1989, as their best album. It also marks the point where The Cure went from being stalwarts of the US College Radio to being a massive live act playing stadiums worldwide.