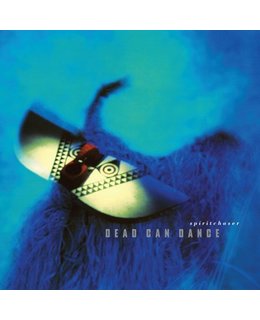 (1996) - 2017 EU reissue on 2LP -SpiritchaserDead Can Dance's 7th album, was the final studio album the band released with 4AD (it was to be another 16 years until they reconvened to make their eighth, Anastasis).

2017 EU reissue on 2LP -Spiritchaser, Dead Can Dance's seventh album, was the final studio album the band released with 4AD (it was to be another 16 years until they reconvened to make their eighth, Anastasis).

Tracks:
LP1:
A1 Nierika
A2 Song of the Stars

B3 Indus
B4 Song of the Dispossessed

Formed in Australia in the early-80s by Lisa Gerrard and Brendan Perry, Dead Can Dance had veered away from the punk explosion towards a more non-conformist style. But finding the music scene unreceptive they moved to London, landed a record deal with 4AD and embarked on a career with the label that would last 17 years. Now highly respected artists with a loyal global fanbase, Gerrard and Perry consistently make music full of integrity and passion. Both immensely talented vocalists - Gerrard with her inimitable, mesmeric style and Perry's haunting baritone - they were also gifted, instinctive musicians and their melding of traditional instruments with samplers created a bridge between ancient and modern musics. March 2017 sees the final three albums from their 4AD catalog come back to print on vinyl. The Serpent's Egg (1988), Aion (1990) and Spiritchaser (1996) complete the vinyl re-release series.

Spiritchaser, Dead Can Dance's seventh album, was the final studio album the band released with 4AD (it was to be another 16 years until they reconvened to make their eighth, Anastasis). Again recording at Brendan's Quivvy Church in Ireland and as hinted at by the album's title, the band had moved their focus away from the traditional medieval and Eastern sound of their middle albums to work with African and Caribbean tribal rhythms. Still unmistakably Dead Can Dance, percussion is at the forefront throughout Spiritchaser and despite contributions from Ronan O'Snodaigh, Renaud Pion, Lance Hogan, Robert Perry and Peter Ulrich on a few tracks, the album is mostly just Perry and Gerrard. In fine voice throughout, like their whole career's work, their strong singing remains the centerpiece.

Dead Can Dance Spleen And Ideal

Dead Can Dance Toward The Within =2LP=

Dead Can Dance Within The Realm Of A Dying Sun