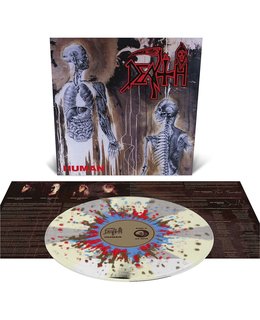 2020 EU limited repressing on coloured180gram vinyl LP = Human is the fourth studio album by American death metal band Death.The album marked the beginning of a major stylistic change for Death, being more technically complex and progressive than the band's previous efforts. The lyrics are more introspective when compared to the gore-based lyrics of Scream Bloody Gore and Leprosy or the social commentary on Spiritual Healing.

This new style would continue to evolve on all following Death albums. This is the only album to feature Cynic members Paul Masvidal on guitars and Sean Reinert on drums, both only 20 at that time, and the first to feature bassist Steve DiGiorgio.

Tracks:
A1 Flattening Of Emotions
A2 Suicide Machine
A3 Together As One
A4 Secret Face

System of A Down (SOAD) -Toxicity