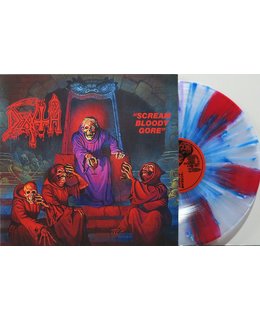 2020 EU limited repressing on coloured180gram vinyl LP = Scream Bloody Gore is the debut studio album by death metal band Death. It is considered by some to be "the first true death metal record".

Today, the album is viewed unanimously as one of the all-time most important cornerstones of death metal.

Chuck Schuldiner plays bass and guitar, wrote all the songs on the album and provided all the vocals. This is also the only Death album to feature drummer Chris Reifert.

Tracks:
A1 Infernal Death
A2 Zombie Ritual
A3 Denial Of Life
A4 Sacrificial
A5 Mutilation
A6 Regurgitated Guts