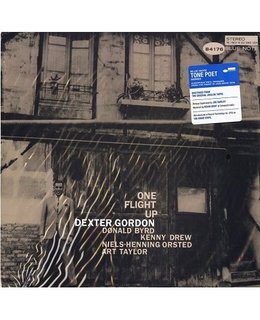 2021 Blue Note's New Tone Poets Series = reissued on 180GR vinyl =Dexter Gordon had been living in Europe for several years when he recorded One Flight Up, one of his acknowledged masterpiece albums, in Paris in June of 1964. It’s all here: Dexter’s magnificently huge sound, Donald Byrd in peak form on trumpet, the subtle sophistication of pianist Kenny Drew, the utter brilliance of the then-teenaged bass phenom Niels-Henning Orsted Pederson, and the rock-steady swing of drummer Art Taylor. The opening track “Tanya” takes up the entire first side of this album at 18+ minutes, and it is a performance for the ages.

The Blue Note Tone Poet Series was born out of Blue Note President Don Was’ admiration for the exceptional audiophile Blue Note LP reissues presented by Music Matters. Was brought Joe Harley (from Music Matters), a.k.a. the “Tone Poet,” on board to curate and supervise a series of reissues from the Blue Note family of labels.

Extreme attention to detail has been paid to getting these right in every conceivable way, from the jacket graphics and printing quality to superior LP mastering (direct from the master tapes) by Kevin Gray to superb 180 gm audiophile LP pressings by Record Technology Inc. Every aspect of these Blue Note/Tone Poet releases is done to the highest possible standard. It means that you will never find a superior version. This is IT.

A Tanya
B1 Coppin' The Haven
B2 Darn That Dream

The second of two albums compiled from recordings made at the celebrated New York jazz club Village Vanguard, State Of The Tenor: Live At The Village Vanguard, Volume 2 captures the bearded and bespectacled Midwest tenor Joe Henderson on the nights of 14, 15 and 16 November 1985.

Seven of Henderson’s performances from those nights – where he received stellar accompaniment from bassist Ron Carter and drummer Al Foster, both ex-Miles Davis sidemen and legends of their respective instruments – were issued by Blue Note Records on an album called State Of The Tenor: Live At The Village Vanguard, Volume 1, in 1986. It received such huge acclaim from critics and fans that it was inevitable, perhaps, that a second volume would appear. Blue Note duly obliged, releasing a second and final instalment the following year.