Nederlands
Home On the Radio=2LP= Greatest Hits Vol. I & II 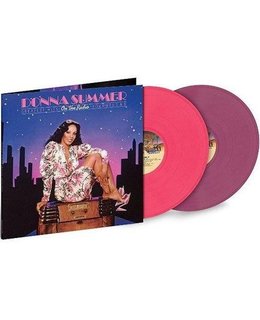 (1979) - 2018 EU repressed on colored 2LP= with "No More Tears (Enough Is Enough)," a duet with Barbra Streisand in an extra-long, 12-inch version that takes up most of side four and which simultaneously appeared (in a slightly shorter version) on Streis

This iconic 1979 collection, features 16 of Donna Summer's sweetest hits of the '70s; all tracks, as they appeared on the original 2LP release, are "DJ-mixed" – they segue together – for maximum entertainment. This edition, issued on the heels of the Broadway debut of Summer: The Donna Summer Musical, is presented for the first time on highly collectible colored vinyl. On The Radio was a global smash, peaking at No. 1 in the US. and going double platinum. It also put Summer in the history books: with this album – following the 2LP sets Live and More and Bad Girls – she was the first person ever to have three double-album releases in a row reach the top of the charts.,

On The Radio features two then-new songs: the title track, which appears twice, in long and short versions, and, when issued as a single, was a top 5 smash; and "No More Tears (Enough Is Enough)," a duet with Barbra Streisand in an extra-long, 12-inch version that takes up most of side four and which simultaneously appeared (in a slightly shorter version) on Streisand's album, Wet. As the lead single from On The Radio, "No More Tears" was a worldwide hit – No. 1 or top 10 in a dozen countries and certified gold in the US.

Established hits from the album include the perpetually seductive "Love To Love You Baby" (No. 2 pop, No. 1 Dance/Disco, Top 10 worldwide); the groundbreaking cultural touchstone "I Feel Love" (Top 10 worldwide); her version of Jimmy Webb's fabled "MacArthur Park," which hit No. 1 everywhere; "Heaven Knows," Summer's duet with Joe "Bean" Esposito from Brooklyn Dreams derived from the original "MacArthur Park" medley, that peaked at No. 4; the one-two punch of "Hot Stuff" and "Bad Girls," back-to-back No. 1 hits; Summer's original "Dim All The Lights" that hit No. 2; and the unstoppable "Last Dance" that was No. 1 Dance, No. 2 pop and Top 10 worldwide.
All of the songs on the collection were produced by Summer's frequent collaborators, Giorgio Moroder and Pete Bellotte, except "On The Radio," produced by Moroder alone, and "No More Tears (Enough Is Enough)," which Moroder co-produced with the Grammy-nominated producer Gary Klein. And for this reissue, the album, originally in a single sleeve, is now in a gatefold jacket with the poster image printed across the inside.