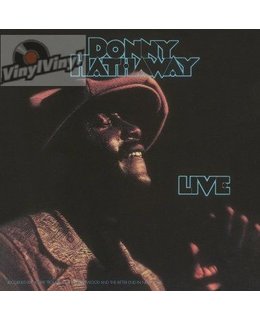 (1972)- 2012 EU reissue on 180 g = with Hathaway's version of the instant soul classic "What's Going On," Donny Hathaway had one of the strongest voices in Soul both in mere vocal prowess and in his lyrical abilities The Ghetto one of his most beloved son

2012 EU  reissue on 180 gram audiophile vinyl = Gatefold sleeve= Donny Hathaway's 1972 Live album is one of the most glorious of his career, an uncomplicated, energetic set with a heavy focus on audience response as well as the potent jazz chops of his group.

The results of shows recorded at the Troubadour in Hollywood and the Bitter End in New York, the record begins with Hathaway's version of the instant soul classic "What's Going On," Marvin Gaye's original not even a year old when Hathaway recorded this version. His own classic "The Ghetto" follows in short order, but stretches out past ten minutes with revelatory solos from Hathaway on electric piano. "Voices Inside (Everything Is Everything)" is another epic (14-minute) jam, with plenty of room for solos and some of the most sizzling bass work ever heard on record by Willie Weeks. Any new Donny Hathaway record worth its salt also has to include a radical cover, and Live obliges nicely with his deft, loping version of John Lennon's "Jealous Guy." The audience is as much a participant as the band here, immediately taking over with staccato handclaps to introduce "The Ghetto" and basically taking over the chorus on "You've Got a Friend." They also contribute some of the most frenzied screaming heard in response to any Chicago soul singer of the time (excepting only Jackie Wilson and Gene Chandler, of course). Hardly the obligatory live workout of most early-'70s concert LPs, Live solidified Hathaway's importance at the forefront of soul music.