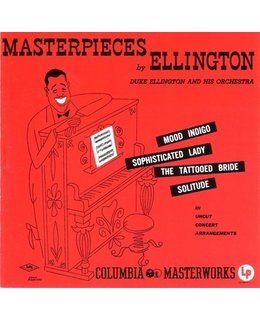 ( 1951 ) 2017 US 45RPM repressing on 200gram vinyl -1951's Masterpieces by Ellington, includes extended takes on classics "Mood Indigo," "Sophisticated Lady," and "Solitude" plus the newer composition "The Tattooed Bride." an excellent program of newly-

In the aftermath of World War II and the demise of the vast majority of swing bands and orchestras, Duke Ellington fared better than most. Owing to his skills as a composer, sometimes arranger, and skillful bandleader, he weathered the storm. At the other end of that storm, the LP era exploded, with opportunity for the kind of extended-length compositions and concepts that Duke and his collaborator Billy Strayhorn were moving toward, away from the three-minute confines of the 78 rpm era.

Complicating matters was the impending departure of three key players (Johnny Hodges, Lawrence Brown, and drummer Sonny Greer), and a new sound that Duke was envisioning for his band, "the most significant juncture in the band's 47 year history," Grammy Award-winning writer Loren Schoenberg notes. Ellington's relationship with Columbia in the LP era began with 1951's Masterpieces by Ellington, an excellent program of newly-recorded uncut concert arrangements of his familiar themes and one of the last with the aforementioned classic line-up. Includes extended takes on classics "Mood Indigo," "Sophisticated Lady," and "Solitude" plus the newer composition "The Tattooed Bride."

Masterpieces By Ellington shines from an astonishingly brief period of history that gave the recording industry two of its greatest achievements – the introduction of magnetic tape recording and the 33 1/3 LP, or long-playing record. Now with Analogue Productions 45 RPM release, the best-sounding version of this historic album gives listeners an even richer sonic experience. The dead-quiet double-LP, with the music spread over four sides of vinyl, reduces distortion and high frequency loss as the wider-spaced grooves let your stereo cartridge track more accurately.

"Among the first recordings arranged and produced to take advantage of the LP's longer playing time...Freed from the 78rpm single's three-minute constraint, Ellington could score and record concert-length arrangements similar to those enjoyed by his concert audiences. Three of the four selections, including 'Mood Indigo' and 'Sophisticated Lady,' are familiar Ellington classics stretched and elasticized to luxurious effect. The harmonically saturated, transparent mono sound is astonishing for any era of recording." – Michael Fremer, Stereophile